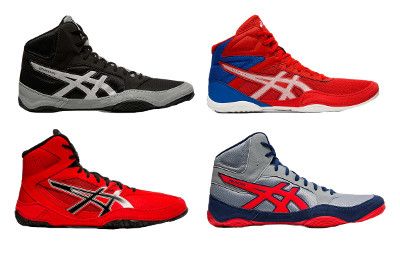 Wrestling shoes are a type of specialized footwear that is designed to be worn while wrestling. Their primary functions are to provide traction and ankle support without inhibiting the flexibility of the wrestler's feet and ankles. Wrestling shoes typically are boot-shaped and made of a lightweight, breathable material.

No restriction of movement

The crouching positions and rapid footwork used in wrestling require athletes to have an unrestricted range of motion in the lower legs. Thus, wrestlers' shoes are designed to approximate the freedom of movement experienced when barefoot. They generally have highly flexible bodies made from fabrics such as mesh or neoprene.

Wrestling shoes' soles usually consist of very thin pieces of rubber that provide a small amount of arch support while allowing the feet to move and bend freely. The most important function of the soles is to provide traction so that the wrestler can use his or her feet to push off while moving around on the mat or while executing moves. For this reason, the sole often extends up onto the sides of the shoe in certain places as well as over the toes and heel. In the video below, the way that the soles extend up onto the sides, front and back of the shoes can be seen.

The extended soles allow a wrestler to push off his or her toes, for example, while lying on the mat instead of only while standing. This is important because much of the action during a wrestling match occurs while both wrestlers are on the mat. The following instructional video shows an example of a move for which a wrestler needs to have good traction in order to push off the mat, or "drive" with his or her feet.

Another important function of wrestling shoes is to provide ankle support, which minimizes the potential for the ankles to be sprained during a match or practice. This support arises from the shoes’ shape and lacing. These shoes generally extend up the ankle to the lower calf area, which makes them resemble thin boots. Some wrestlers prefer to tie the laces a certain way, such the method seen in the video below, because they feel that it provides additional support for the ankle.

The laces run from mid-foot to the top of the wrestling shoe. These laces are tied securely so that the upper part of the shoe hugs the lower leg, discouraging the wearer from twisting or overextending his or her ankle. Loose shoelace ends typically are not allowed during competition, so wrestlers might wrap athletic tape around their shoes to secure the laces. Some wrestling shoes have built-in covers that fold over the laces.

Communicable skin diseases such as ringworm can thrive on wrestling mats. This is largely because of the high temperatures on the mat combined with the fact that wrestlers often make bodily contact with the mats while sweating. Thus, another benefit of these shoes is their ability to protect the wearer’s feet from skin diseases. By covering the feet and lower legs, the shoes act as shields between the wrestler and the mat.

Popular wrestling shoes are widely available from online retailers and specialty sports stores. Wrestlers who are unsure of what type of shoes to purchase should consult their coaches or trainers, who can provide advice about which shoes might best suit their needs. In some cases, wrestlers might be required to purchase shoes in their team colors to provide an appearance of uniformity among team members.